User Guide for the Book of Resolutions

WHAT'S THE PURPOSE OF THE BOOK OF RESOLUTIONS?

• Official policy statements for guiding all the work and ministry of The United Methodist Church on approximately 200 subjects;

• Educational resources for The United Methodist Church on important issues affecting the lives of people and all God's creation;

• Guides and models for helping United Methodist members and groups relate a lively biblical faith to action in daily life;

The Book of Resolutions, 2012 is primarily a reference tool for church members and leaders. It is not a book that you will sit down to read from cover to cover.

You might not get acquainted with these resolutions until you are in the midst of some controversy in your congregation, or something happens regarding a particular subject in your community (or state, or nation). You may find that your denomination's policies give you more “food for thought.” Maybe you will agree with the denomination's position. On the other hand, you may disagree. Individuals or groups in the congregation can seek to change policy with which they disagree by petitioning the General Conference to amend, replace, or delete resolutions.

Furthermore, you may look to some of the statements in this book for spiritual guidance as you make an important decision in your life about work, home, family life, or use of money and other resources.

CAN YOU ANSWER SOME OF MY QUESTIONS?

Why do we have all these social policies and resolutions?

The resolutions say, “We care!” Delegates to the General Conference of The United Methodist Church believe that we each need and deserve the guidance of the whole denomination as we face daily hopes, struggles, joy, or pain. The resolutions and Social Principles express our Church community's beliefs and give us evidence that the Church means for God's love to reach into situations faced each day, not just on Sunday mornings. Not all of us are intimately involved with each issue, but someone, somewhere, is.

Isn't The Book of Discipline enough?

The Book of Discipline establishes a framework for each part of United Methodism. The General Conference decided in 1968 that for reasons of length, these resolutions should be published in a volume separate from the Discipline. While The Book of Resolutions is not legally binding, it is an official guide from our denomination to be used responsibly for reference, encouragement, study, and support. (Note Judicial Council Decision 671 holds that in some circumstances resolutions do have authority of law.)

Why do the Social Principles appear in both the Discipline and in The Book of Resolutions?

The United Methodist Church puts the Social Principles in the Discipline (¶ 160-165) as one of our denominational foundation statements suggesting how faith is translated into action. Its broad principles (guides, not rules) are declarations to help us be in dialogue with one another about how faith motivates us to “get off the fence” and act.

Where do these policies and resolutions come from? How do they get adopted by General Conference?

They are sent in as petitions to General Conference every four years by general agencies, annual conferences, local churches, individual members, and groups. Once submitted as petitions, most of them are worked on by delegates in a legislative committee. The legislative committees accept, reject, or amend the petitions, then report their recommendations to the General Conference plenary; all delegates then vote on their recommendations.

Can I trust the statistics and data in these resolutions?

General source references are usually given when statistics are used in a resolution. Because such data may change during the years the resolution is valid, sometimes the resolution will provide more general descriptions of social conditions that make it urgent for the church to speak on a particular topic. Resolutions will take on more meaning when you secure local statistics and data on relevant topics.

Why do church social policies and US government policies or positions seem so far apart on some of these issues?

The United Methodist Church membership extends beyond the US boundaries; it is global. So, in many cases we are speaking to, from, or with more than one national government. Further, the Christian church must never be a mirror image of any government, whether Democrat or Republican, totalitarian or democratic. We know that Christians are obligated to be responsible and participating citizens under any governmental system, but that response and participation is to be interpreted in light of our faith.

As the Social Principles state, “Our allegiance to God takes precedence over our allegiance to any state” (¶164). And our church's public witness is first and foremost to be judged by God by whether it supports justice, love, and mercy, particularly for the poor and powerless.

Why can't the church just let us make up our own minds on these matters after it presents us neutral information on both sides of an issue?

Most importantly, The United Methodist Church believes God's love for the world is an active and engaged love, a love seeking justice and liberty. We cannot just be observers. So we care enough about people's lives to risk interpreting God's love, to take a stand, to call each of us into a response, no matter how controversial or complex. The church helps us think and act out of a faith perspective, not just respond to all the other “mind-makers-up” that exist in our society.

No information is truly neutral. This is true even of the most “hard scientific” data secured from the most advanced technology. These resolutions do strive for objectivity, not neutrality. There are usually more than “two sides” in important social controversies. Dialogue between different sides is critical in taking a stand. Faithfulness requires favoring what best demonstrates God's love and being willing to change when new perspectives or data emerge.

Is this something new in United Methodism?

Taking an active stance in society is nothing new for followers of John Wesley. He set the example for us to combine personal and social piety. Ever since predecessor churches to United Methodism flourished in the United States, we have been known as a denomination involved with people's lives, with political and social struggles, having local to international mission implications. Such involvement is an expression of the personal change we experience in our baptism and conversion.

Is there a difference between a social policy and a resolution?

The terms are used almost interchangeably in The United Methodist Church. Most social issue resolutions refer to public policy matters, such as local, state, and federal government programs and legislation. Other statements focus on conditions affecting the church and the church's programs or funding.

How do people use this Book of Resolutions?

• An ordained minister went to console neighbor parents after their son committed suicide. At home later that evening, the pastor and his own family struggled in their grief to apply their faith to this troubling situation. What did the church say about suicide? How should a Christian act? The pastor found the 1980 Book of Resolutions absolutely silent on this topic. During the six years after that first personal encounter with ministry after a suicide, the pastor wrote letters and articles and talked with seminary faculty and national church staff. As a result, the 1988 General Conference adopted its first resolution on suicide. Instead of merely wishing for guidance from our church on this most difficult subject, this pastor gave constructive leadership in the church, and we now can find helpful perspectives in The 2012 Book of Resolutions.

• Clergy writing their sermons, Sunday school teachers planning lessons, and church leaders preparing presentations for any purpose can use the new scripture index to the resolutions to find and add informative and persuasive language to their work. The mission of the church can be extended by presenting its social vision to make disciples for Jesus Christ in the world.

• A bishop and an annual conference board of church and society wanted to share a United Methodist position against the death penalty with their governor, who had to consider clemency for a death row inmate. They visited the governor and delivered a letter stating their own views of this particular situation and describing why The United Methodist Church opposes the death penalty. They used the resolution on capital punishment in The Book of Resolutions as the official policy of The United Methodist Church to support their plea for clemency.

• An adult church school group studied the foreign policy discussion topics called “Great Decisions,” issued annually by the Foreign Policy Association. They compared its resources with positions in the relevant United Methodist policies from The Book of Resolutions for several evenings of lively study.

• Another adult class meeting on Sunday morning always studied faith and contemporary issues. For nearly six months, the members used The Book of Resolutions to guide their study and discussion. Different members made presentations on some aspect of the resolutions; then they used the study questions provided on page 38 to stimulate some challenging discussion. Occasionally, they had guest speakers or used an audiovisual resource from their conference media center to amplify the subject.

• A nurse who is an active church member found the resolutions on “Health Care for All in the United States” and “Ministries in Mental Illness” to be helpful as she reflected on the strains in her job. She found it more possible to connect her faith to her discussions with coworkers about some of the major issues facing her profession in a big city hospital.

• A local church's outreach work area asked its church council to approve a congregational statement to the county zoning board favoring the construction of several low-income housing units. As part of their homework, the work area members reviewed the “Housing in the USA” resolution in The Book of Resolutions. That resolution then served as a basis for their initiative; they even quoted from it when they testified at the zoning board.

How do I Use The Book of Resolutions?

Example:    If you want to know whether our denomination has spoken about AIDS or HIV, you look for those entries in the index. These subjects are referred to in a number of resolutions.

Example:    What is there on “racism”? The index includes a number of references. You may also choose to look under “African Americans,” “Native Americans,” or “White Privilege.”

How can I understand the Social Principles? 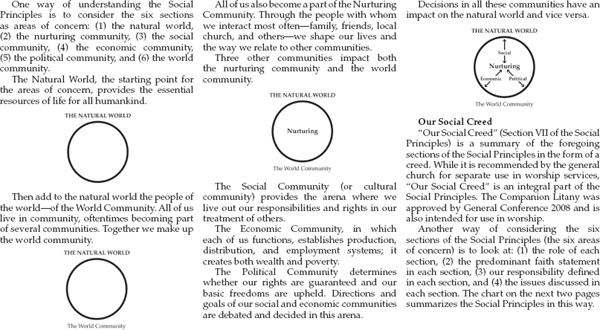 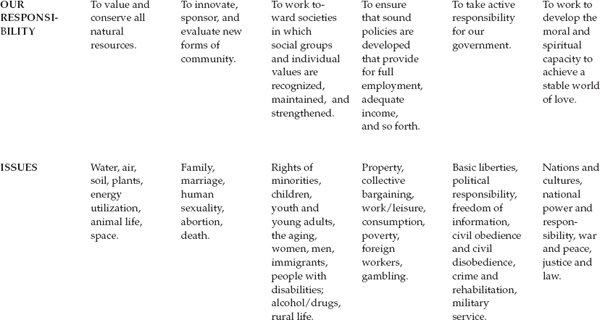 How can I better understand the Resolutions?

• the rationale or reasons for the resolution;

• the Social Principles paragraph to which that resolution relates (found at the conclusion of any resolution);

• the biblical references and/or theological concerns identified in that resolution;

• the major actions called for in that resolution for churches; individuals; church agencies; local, state, or national governments;

• the date the resolution was passed or amended and readopted by General Conference.

• the resolution number from preceding volumes. 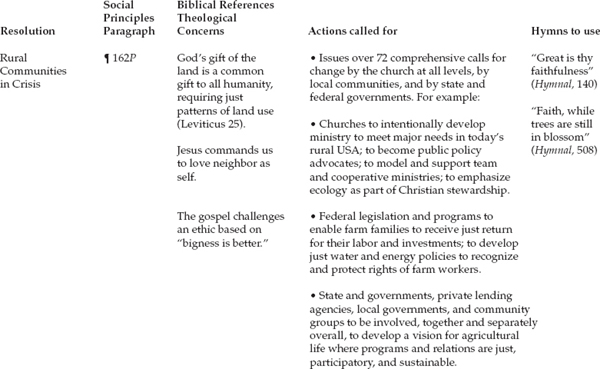 What do I do next?

Consider these questions for study and response to any of the resolutions:

• How familiar am I with the situation(s) described in this resolution?

• What are my reactions to this call for action by our church?

• How could our local congregation creatively respond to the calls for action in the resolution?

• Are there groups in my area or state at work on this issue where I could join in action or learn more?

• What have I communicated to our congressional members or state legislators about our church's position on an issue of great importance?

If you purchased the Membership Records Manual, Financial Records Handbook, or Charge Conference Forms your Digital Downloads can be found here.